We had some funny letters today at the Berean office. The first one Marvin read was one none of us had ever heard before. This man sent back his study blank, nothing done on it at all with a long letter stating: I thought you were a conservative Christian organization. I find that the Bible you sent was from China which has a terrible human rights record. It went on to say how could Berean support China and all of the Muslim countries by giving the prisoners a Bible made in China. Of course he kept the Bible but is refusing to do the study. 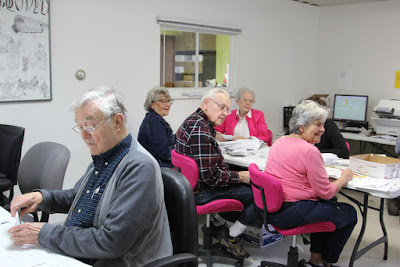 Above Chuck is hard at work applying labels while Shirley, George, Joyce, Eva Jean and Vonnie were listening to the letter. Next Jan read another funny letter. We were enjoying the reading today. 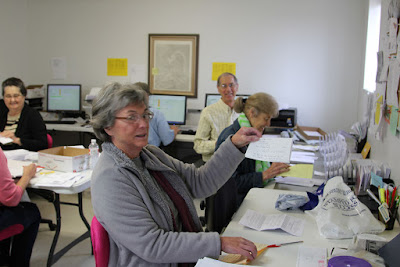 Bill was working on the computer but had us all laughing with this joke. A cannibal was complaining to his friend about his last meal. He said he had been boiling some missionaries and they just kept coming out tough. His friend asked, "can you describe the missionaries?" "They are dressed in long brown frocks replied the cannibal." "That's the problem" exclaimed the friend, "Those are Friars!" 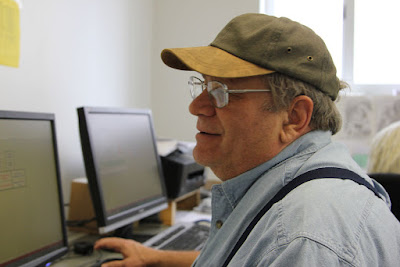 Marvin, Jeanette and Jan were the readers today. We were missing lots of our regulars but thankfully have people willing to just jump in and do the job. Dave and Kathy were up visiting their daughter Emily, Leila and Bruce had a doctors appointment and mom is in Gulf Shores, AL. 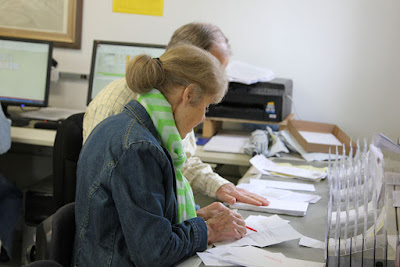 We had almost 400 studies come in. Vonnie organized the other room, Jeanette, Shirley and Chuck moved out there to help separate and stuff studies. 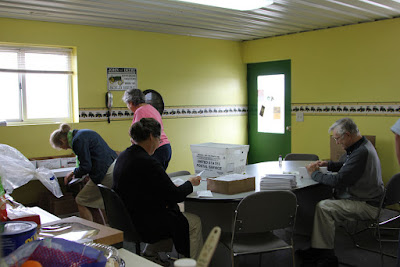 We were missing Marie who usually organizes this room, her husband Gary had an accident Saturday night with a chain saw. The saw slipped, cut through his boot into his leg and even into the bone. Gary will be laid up for more than a month. He is a farmer and with this wet weather does not have his planting done.  We are asking for prayers for Gary.
We finished most of the work by noon today and enjoyed lunch together. We are thankful for this office that supplies our needs so well.
Posted by Judy Sceggel at 8:39 PM