We had a funny morning at the Berean office today. It started with the door. The key would not go into the keyhole.  Water had gotten into the lock from the storm and froze. The door knob needed to be heated up by hands and breath until the ice melted. Then the computer program we used would not open. The program was rebooted up twice and then the computer itself shut down and restarted and still it would not work. Marvin was able to use the back up from last week to get it started.  Robin arrived to make copies except the copy machine was out of ink.  Bruce was in charge of the postage machine and that too kept declaring it was out of ink. At least that worked. We had one of the studies come in with no name, no number, no address on any of the 4 studies and the envelope was accidentally thrown away. Shirley and Vonnie went through each envelope until they found 3 possibles. Of those 3 only 1 was on that study so we sent it to that prisoner although we have no idea if it really was this person's study.  All of this took extra time.  I grabbed my camera to take a few pictures, was snapping away at them, looked down and saw the notice that there was no card in the camera.  The phone was used for the 3 pictures below. 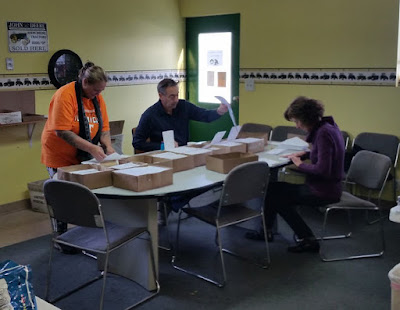 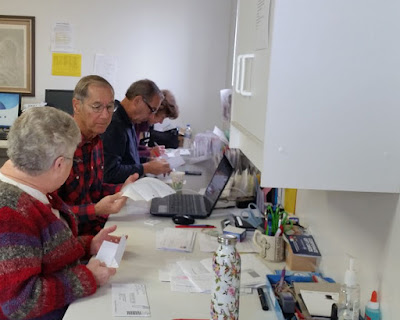 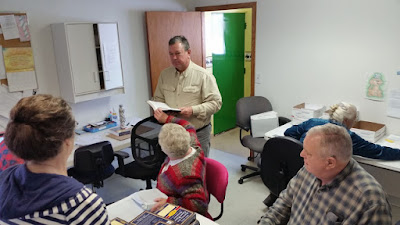 We had almost 100 Bible request this week and over 200 studies so there was a lot to get done. We didn't finish until just after noon. Went to dish out the soup and the crock pot had been accidentally turned off. The soup was just warm not hot. At that point just about everyone in the office burst out laughing. That last little irritation brought out the humor of the entire morning.  I'm thankful we can laugh at small irritations and very thankful for each and every volunteer that came in this cold snowy day. It really means a lot that each and every prisoner who requested a Bible this week will get a Bible and each prisoner that returned a study will have that study graded, sent back and sent the next 4 lessons thanks to these amazing volunteers.  Bill stayed until the last person left as the parking lot was snow covered with ice underneath. He wanted to make sure everyone one safe as they left the office.