Ps 127,3  “Lo, children are an heritage of the LORD: and the fruit of the womb is his reward.”
Our second grandchild was born. Glory to the Lord Leah is healthy and has Christian parents. We pray for her, may the Lord bless her! 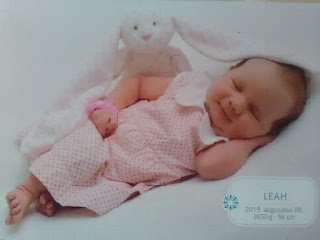 This month due to the fact that in most prisons it is the month of holidays, and I did not have activity in the Mioveni Prison I took the opportunity to visit all the volunteer leaders in the country. Every time I filled the car with devotional books so many that I could not have sent by post. I traveled a lot but I had warm meetings, blessed conversations:
Brother Dantus received me in his new apartment in Cluj Napoca. With tears in his eyes, he expressed how pleased he is that he has a home of his own and he received a kind help to this by Berean board. 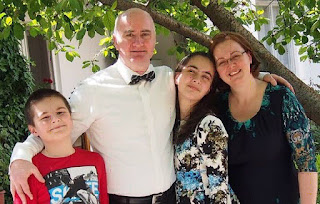 Besides his volunteering activity he works part-time as a paralegal, his wife teaches Romanian language and literature at a nearby school. We have been friends for more than a decade, may the Lord bless them.
Brother Elekes is a pensioner, but he still serves in his church as a substitute preacher and he is a busy man. He sadly told me that for months he has not been received in the prison and the management there does not communicate for what reason refuses his team (Toth Zoltan a highly educated missionary, Ferko Attila a young pastor). They do not have the opportunity to serve. This problem with Oradea Prison I already noticed last year and you also asked the official delegation when they visited you last year, but so far nothing has happened in this case. It is very likely that we get into the rare situation that we have volunteers but we have no opportunity to serve.


We are praying to the Lord for this case. All things are in His hands.
Brother Spatarelu welcomed us with love. He had a busy summer with the church children. He gladly told us that his daughter had recently been married. They have a marriage in the Lord. He starts the program in September with a new group of inmates. And soon, besides his job as a pastor, he will restart his professorship at the Christian school in Craiova. He is a very busy man, also serves with love among the prisoners. 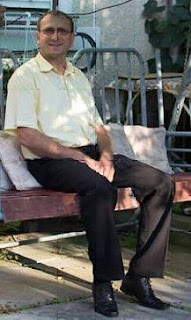 We also talked about the legal possibility of making individual visits to inmates, who have become Christians, or they have contact with evangeical churches in Oltenia (region of the country).

I visited once again on my way home Costin Dumitru. He was just working on some social aid for needy people. His association with the name Gloria pro Deo is well known throughout the area, often making donations to Gaesti Prison where he is a volunteer. His team is highly appreciated by the management.
At Bondoret’s I read letters from prisoners, with whom he met over the years. Some express their great joy of hearing the gospel and changing their lives. Brother Cristi also told about a young man from his team who finished the military academy and is now a commander in a military unit he is also a devoted Christian. Cristi’s mother is diagnosed with Alzheimer's disease, I thank the Lord that the food she made was perfect, she didn't forget any ingredient. So she's still fine. It is the only family with which I am a friend where culinary culture reaches mastery levels. It is a blessing any meeting with the Bondoret family.
As I told you before (April July letters), we have a new volunteer who rarely goes to the prison with Viorel, but he is very passionate about correspondence. In fact, besides his ministry as a pastor in a small church, he serves at a Bible school through correspondence. 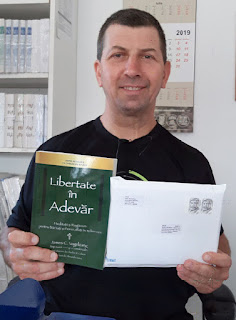 Our book of devotions has been warmly received bz him and he is glad that he can send to his inmate contacts. A new way to serve those behind bars. Thank God he is often helped by his daughter.

Brother Baboi also sent some pictures about the occasion when he distributed the books with daily devotions to the prisoners. Inmates read the book on the picture. 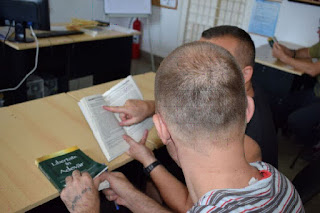 In August, I had the opportunity to serve in a Baptist church also.
Do not forget the people with whom your life started, I had the privilege to pray together of preaching the gospel to my classmates with whom I had a childhood near Tirgu Mures.

“Remember, if we don't meet here, we will meet there!!” wrote David Meister last time. I also thank you for each letter of encouragement, I read them many times when I can. David Meister wrote the last time. I cannot tell every blessing related to our ministry, many are hidden from the Lord we do not know yet. When we meet at His eternal home we will see those. That will be the perfect comecoming.
Thank you for prayers and support!
With love in Christ,