One of the first letters Marvin opened this morning had to be read out loud and when he was finished reading the letter we all burst out laughing. 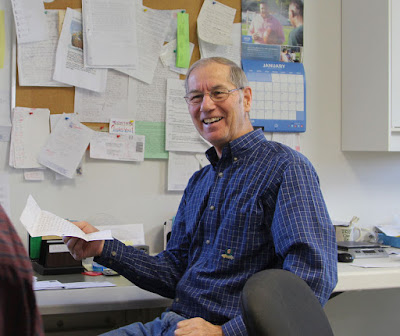 The letter stated that the prisoner wanted a Bible and wanted to start the Bible study because he heard after finishing all 50 lessons he would get a certificate AND $100.00. 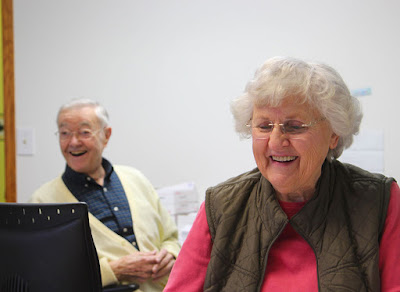 That just isn't true.  We are not sure where he would have heard that but can you imagine how big this program would grow if it was true!
In the picture below Vonnie has mom and Shirley stuffing envelopes while she keeps it all organized. 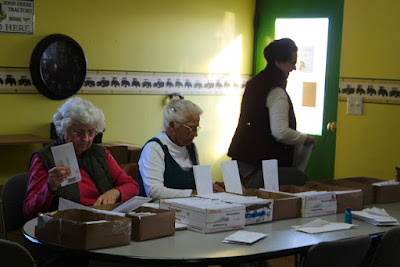 In the other room Jeanette, Marvin and Kathy were all busy working on letters while Bill and Mark worked on the computers. 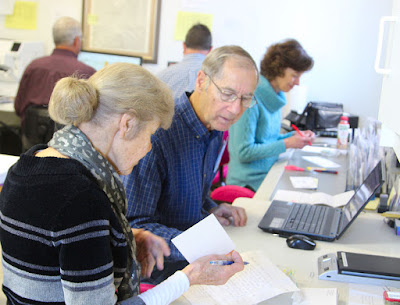 After all the mail was processed, we all went into the other room to start wrapping Bibles for today's mailing. 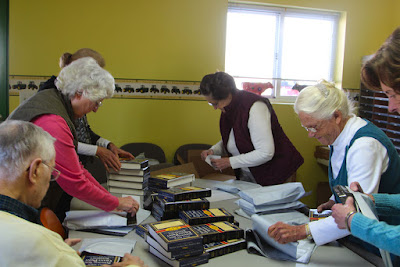 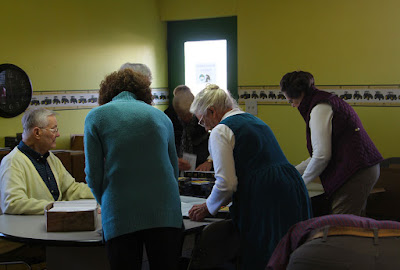 It wasn't until after lunch that Marvin shared some of another letter and asked us to pray for this prisoner. So I'm asking you or anyone that reads this to pray also. This man is in prison for murder, he admits to murdering the couple (his relatives) that took him in to live with them after he was released from jail. He wants help, needs help, he writes that he thinks he is going crazy.  Please pray that this man could turn his life, heart and soul over to Jesus who can and will forgive even the vilest of sinners and heal his mind. He will still suffer the consequence of his actions but will no longer be in the clutches of the evil deceiver who comes to steal, kill and destroy.
Posted by Judy Sceggel at 8:34 PM No comments:

Our day at the Berean office was not quite as expected. It started great. We had plenty of help. Below are a few pictures. 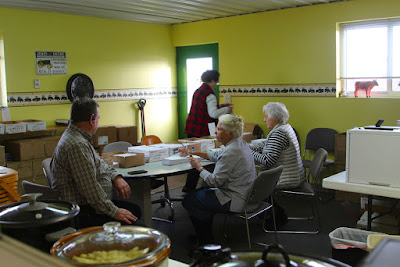 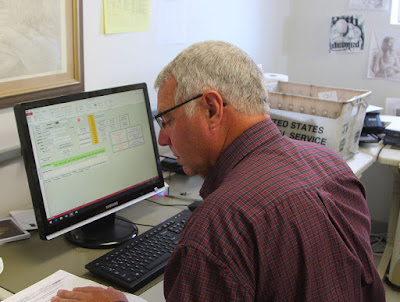 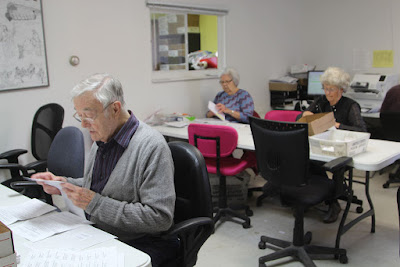 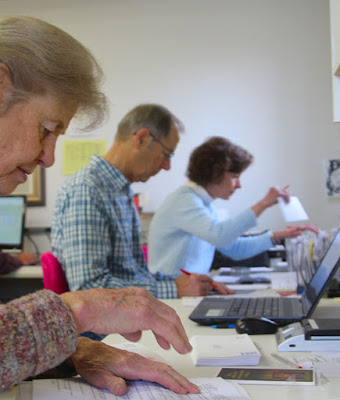 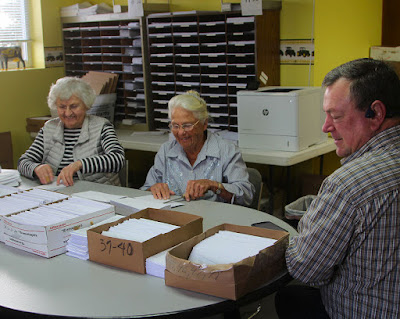 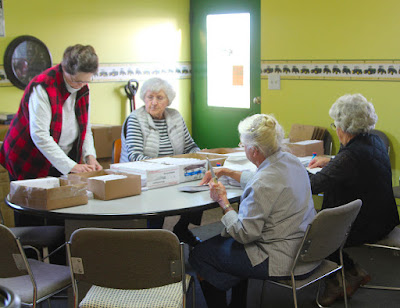 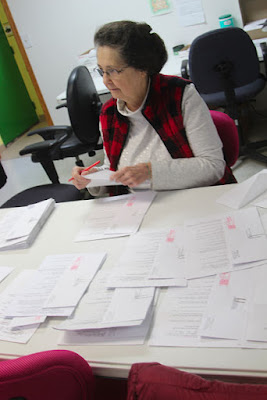 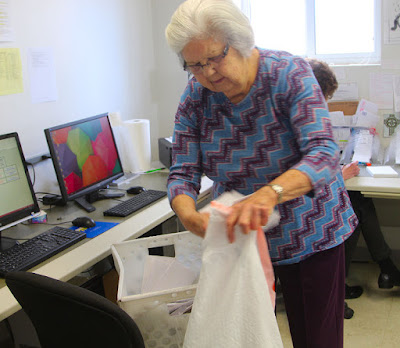 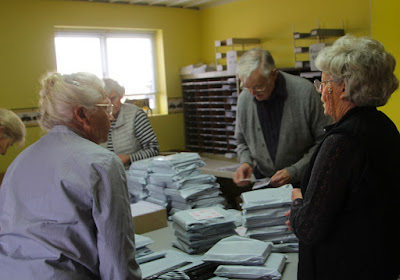 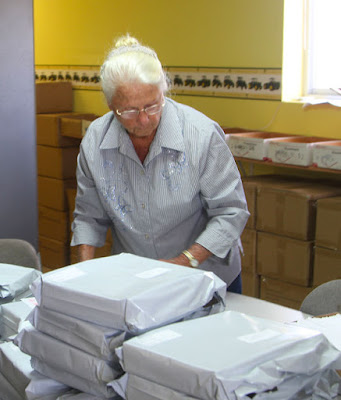 Marvin's wife Gale baked us a couple of pumpkin pies. Now Gale's pies are not made with canned pumpkin and of course she makes her own crust.  WE ALL enjoyed that special dessert. 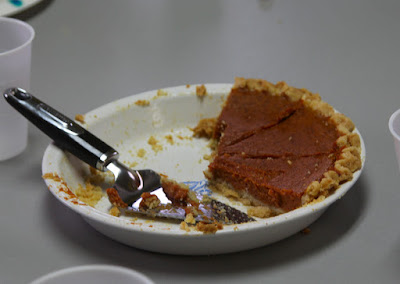 We had another good productive day at the Berean office but at the very end, just as we were finishing up lunch mom fell. She was leaving a little early to take her car to Peoria Tire and Vulcanizing to get the tires checked and the oil changed, grabbed her purse and coat and turned quickly, tripped coming out of the hallway and fell face down, putting a big goose egg on her forehead, smashing her nose into the concrete floor, and cutting her hand. Her glasses didn't break but cut her nose when she slammed down. She was bleeding quite bad and had to stay down until we could get the bleeding stopped. When she was able to sit up and we thought maybe get to the car, she had to lay down before she fainted. Mark Kieser helped get her onto the floor.  Bill Schick helped clean up the blood then drove mom's car to Peoria Tire. Chuck Hemmer followed him then brought Bill back to the Berean office to get his car.  When mom felt a little better she was helped into my car and taken home, given an ice pack for her forehead and nose, an Aleve for the pain and settled into her chair for a nap.  One never knows how the day is going to end.

Posted by Judy Sceggel at 7:56 PM No comments:

We had a really good group of volunteers today at the Berean office. Each person knows what to do and how to keep everything running smoothly. We didn't have as much mail as last week but had plenty of work to keep everyone busy until lunch. Below are a few pictures of the morning. 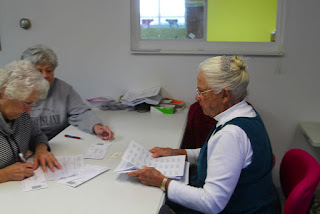 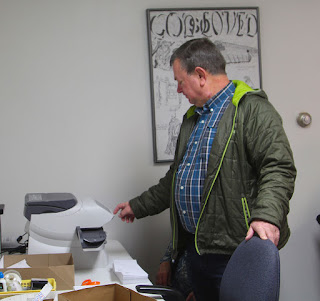 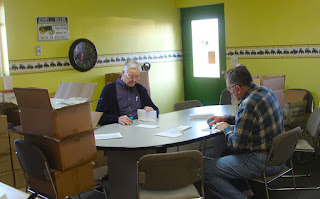 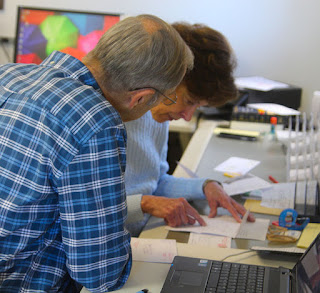 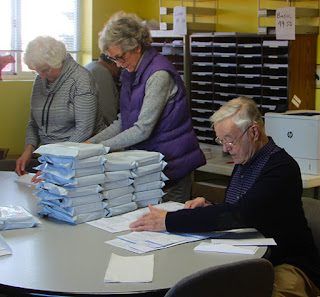 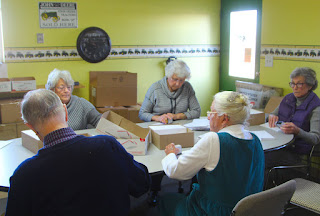 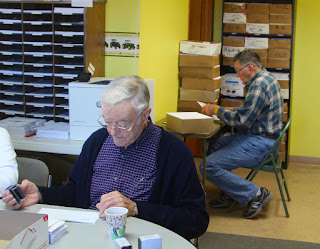 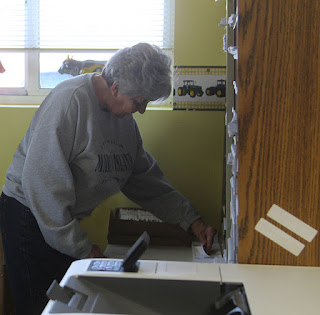 The next time we will be working in this office is Tuesday Jan 14th and we welcome anyone that wants to help.
Posted by Judy Sceggel at 9:21 PM No comments: