Working Side By Side

Most of us arrived before the storm hit this morning and we were all safe inside working hard when the lightning, thunder and rain started.  Inside was bright and cheerful as we worked side by side processing studies and filling Bible requests. 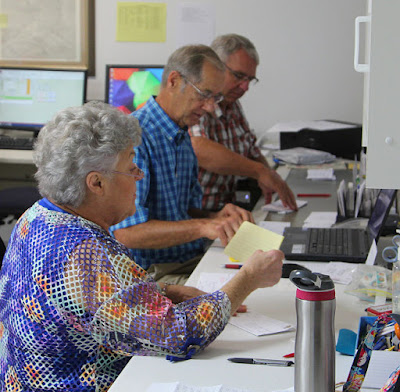 Mark helped on the computer until the studies were processed then helped Marvin and Leila with reading the letters.  Joyce, Vonnie and Ray were working hard in the other room stuffing and wrapping Bibles. 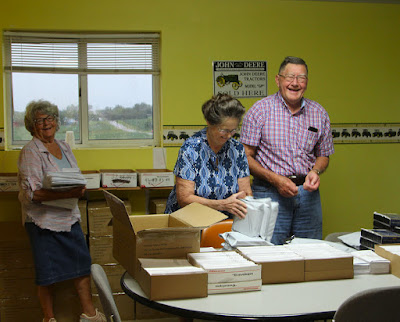 Bruce, Shirley and Shirley worked on the studies until Bruce was needed to run the postage machine. 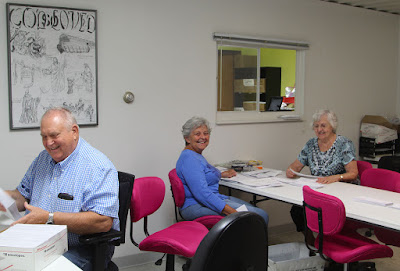 Chuck had been helping with the studies but as soon as they were finished he joined the others wrapping Bibles. 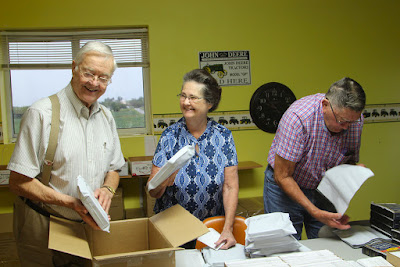 The group below had an assembly line going to get the Bibles stuffed, wrapped, labeled and stamped. 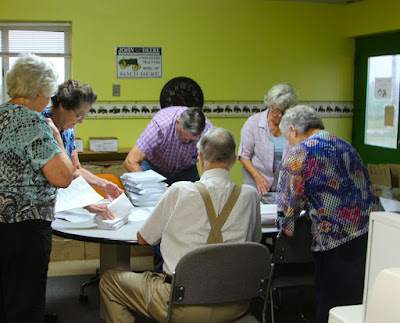 Everyone here works well together side by side.
Don't forget to call or send in your reservation for the Berean Banquet which is coming up Thursday night Sept 12th, at 6:00 pm. This will be held at Five Points Washington in Washington IL.  The featured speaker this year is Gracia Burnham.  For 17 years, Gracia and her husband Martin served with the New Tribes Mission in the Philippines where Martin was a jungle pilot delivering mail, supplies and encouragement to other missionaries, and transporting sick and injured patients to medical facilities.  Gracia served in various roles supporting the aviation program and also home-schooling their 3 children Jeff, Mindy and Zach- all of whom were born in the Philippines. 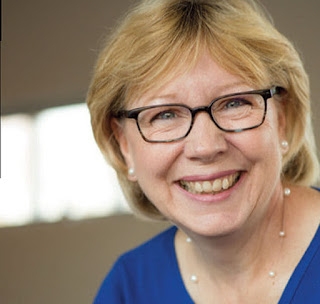 On May 27th, 2001, while celebrating their 18th wedding anniversary at Dos Palmas Resort off Palawan Island, The Burnhams were taken captive by a militant group of Muslims called the AbuSayyaf Group.  In addition to the Burnhams, the group seized several more guests and took them to Basilan Island, an ASG stronghold.  In the ensuing months, some of the hostages were killed but most were set free.  From November 2001, only the Burnhams and one other hostage remained in captivity. For more than a year, and under the total control of their captors, they
were constantly on the move living in primitive conditions in the jumgle, evading capture from the Philippine military, enduring gun battles, and witnessing unspeakable atrocities committed by the men of Abu Sayyaf Group.  Soon after the events of Sept 11th, the news media took a greater interest in Gracia and Martin's plight and kept their story in the national headlines. On the afternoon of June 7th, 2002, over a year since their abduction, the Philippine military attempted another rescue. Tragically, Martin was killed during the gunfight. Wounded but alive Gracia was rescued and returned home under a national spotlight.  Gracia talks about the spiritual lessons she learned during her captivity and how God has blessed her and her family since Martin's death.