This is another installment of Spark's notes of Jesus doing time at the PCJ:
Why wasn't Jesus doing time that Sunday?
Usually there are 2 guards at every church service.  One watches the inmates as they walk down the hall, and the other watches them while they are in the gym.  One Sunday for some reason there was no guard in the gym when the men walked in.  What we didn't find out until later was that an inmate decided to come to church so that he could hurt another inmate that had squealed on him for a crime that they were both accused of.  We were still shaking hands with the incoming inmates when we heard a commotion coming from a fight between these two.  I tried to separate them by getting between them, and wound up kneeling on top of one of them while he was face down on the cement floor.  I told him to stay down, hoping the other man would stop fighting.  The standing inmate took that opportunity to try to stomp on the head of the inmate I was holding on the floor.  As I grabbed his ankle I looked up into the most hate filled eyes I had ever seen.  The guards were there in seconds, but he did manage to stomp on my hand once and make an awesome bruise.
Where were you Jesus?
I told Rhonda afterwards that when I looked into this inmates face, I knew that this man belonged in a cage like a dangerous animal, and in my opinion there was no hope for him.  The guards told me he would never be allowed in church again, and I didn't need to worry about him ever causing problems.  Uncle Ed and I were worried that this could cause the end of the church services at the PCJ.  We used to have a program there that allowed us to give reading glasses to inmates with poor eyesight until an inmate broke off the handle, wrapped the handle, sharpened the end by scraping it again'st his cell wall, and stabbed somebody with it.  No more reading glasses for anyone! The jail thankfully did not cancel church services and we now pray that God would give us peace during the services.
About 6 months later one of the guards told me that the inmate who had started the fight wanted to come down to the chaplain's office and talk to me.  I immediately I remembered that look on his face and I did not want to see him.  The guard said he had changed and that I should see him so I agreed. From the moment he stepped in the office door I could see the peace on his face.  He asked me for forgiveness and explained that after the men in his pod got back from church, they would get into the Word and let him be a part of it.  He wanted to talk to me before he went off to prison.  My eyes are leaking as I write this for several reasons.  #1. Amazing LOVE! #2. Amazing GRACE and #3. I accused Jesus of not doing His time! Forgive me.
This is why we feel so strongly about Berean Prison ministry. If our Lord, who loves even the most hardened dangerous criminal in prison, didn't give up on that stony heart, just think how much He loves you and me. Doesn't everyone deserve to learn of this amazing love and amazing grace?
We had a very productive day yesterday.
We had a lot of mail and although there were not a huge group of helpers, the volunteers we had were all good workers and we were able to finish by noon. Below Eva Jean started right to work on opening the piles of mail. 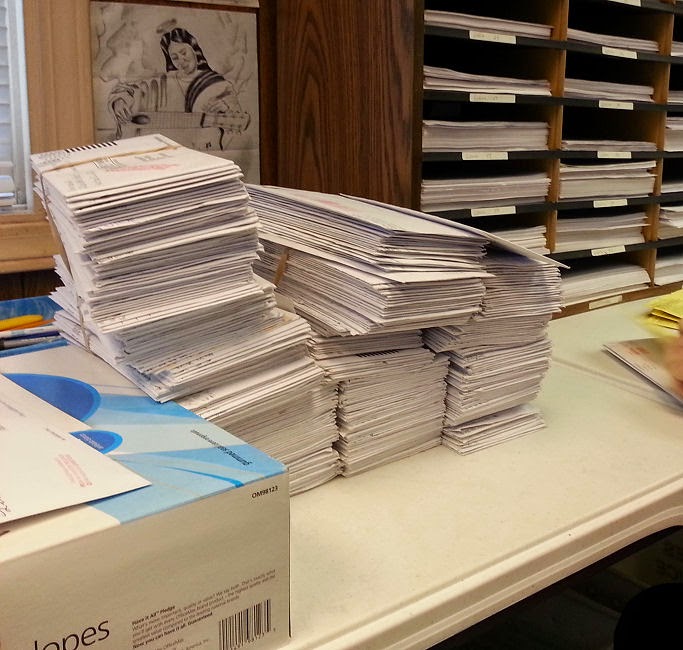 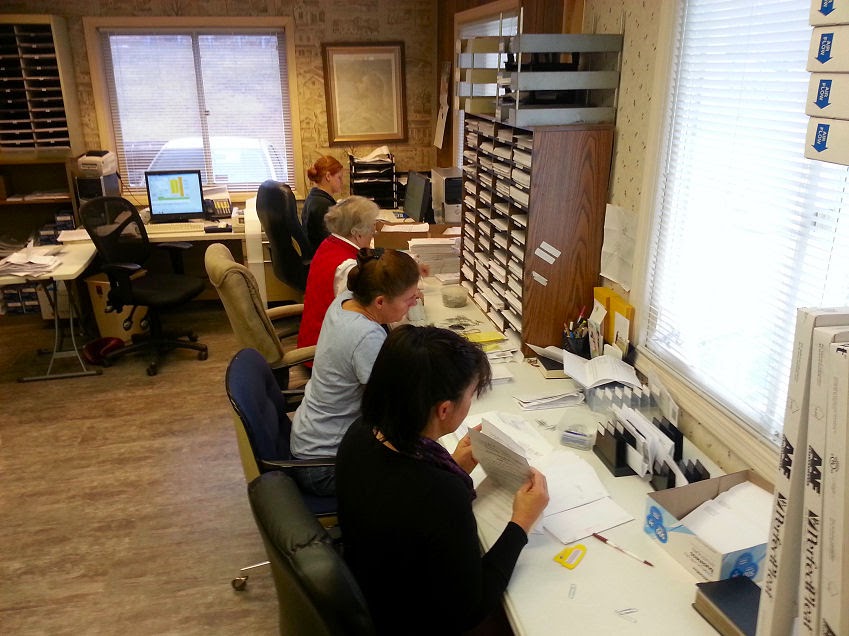 Aunt Bernie was called for more Bible stamps, she ran them down here then took home another big box of studies for her grand daughter to grade. 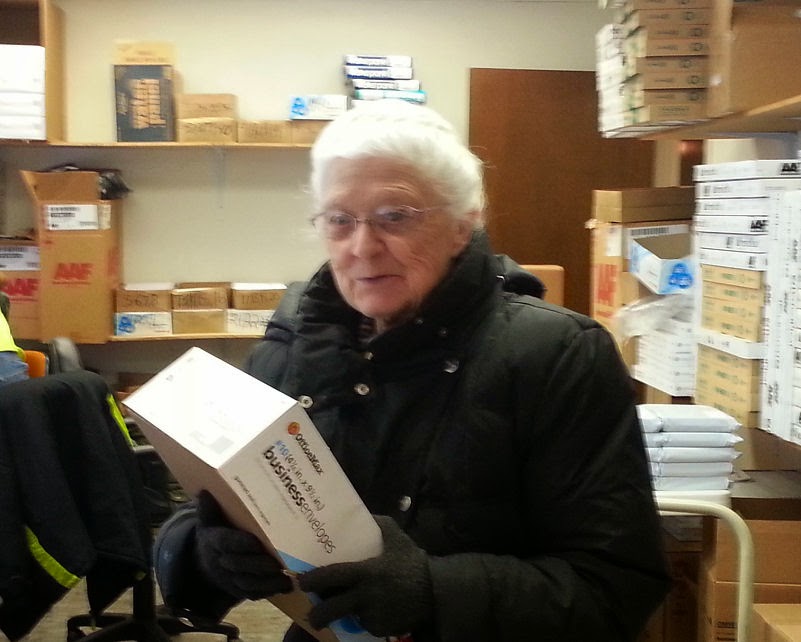 Below Emily, Wesley and Dillon are holding the labels for the Bibles. They got right to work and were almost able to finish. We were 16 Bibles short. Sixteen prisoners are not going to get their much anticipated Bible this week. We are praying the Goodfield and Roanoke young groups will get busy and wrap another thousand Bibles for us soon! 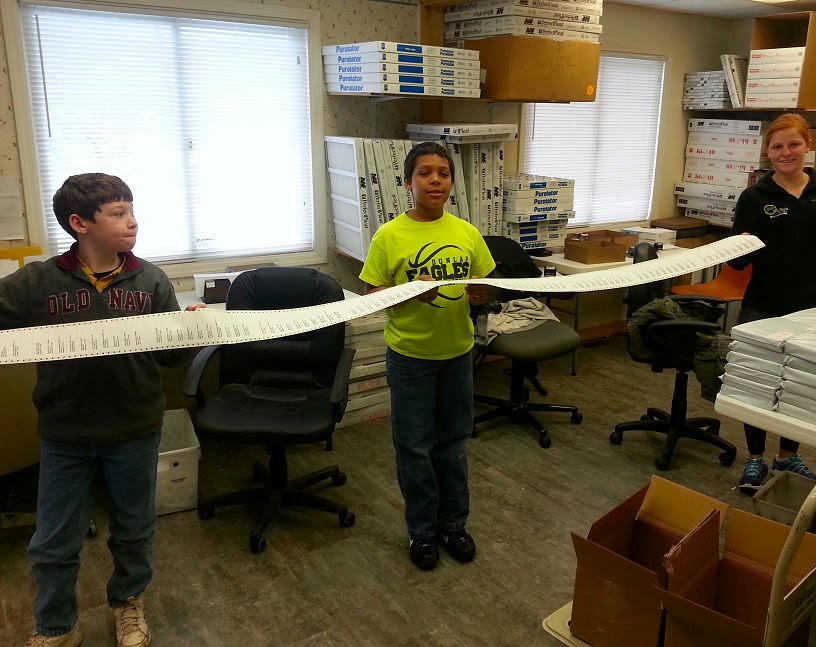 Below the 2 Dianes are sitting on one side of the table stamping envelopes while Maddi, Eva Jean and Rachel are stuffing envelopes. 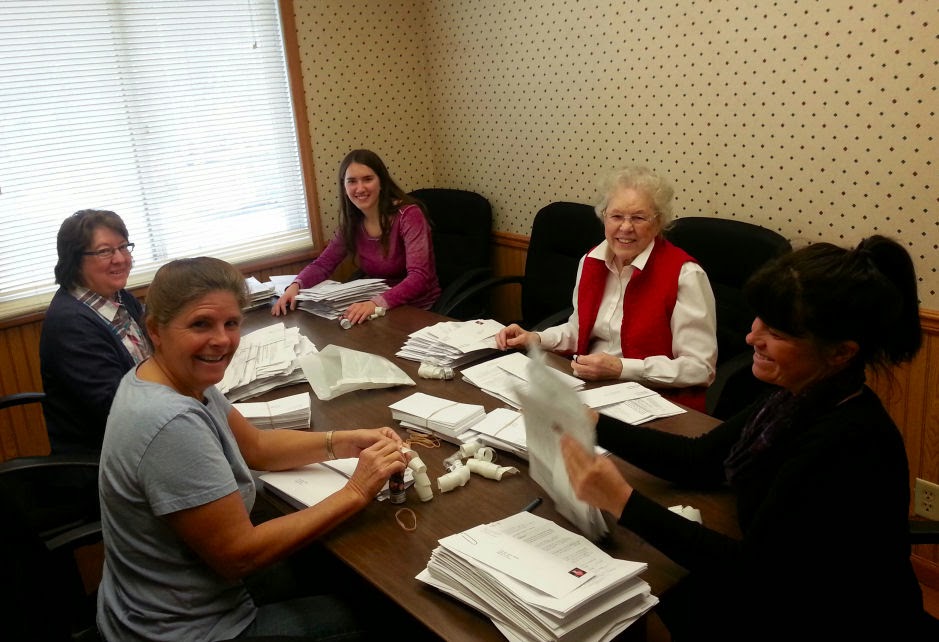 Diane and I are leaving the country for the next week so this will be the last post until we get back. Kathy and Dave Obergfel are going to pick up and open the mail and of course read letters but we won't be able to get any mailings out.
Our prayer requests for this week is a big one. We really need to get the Bibles here. That sounds so easy but someone must purchase them, someone must ship them to the Bible distribution warehouse, someone must organize the stuffing and wrapping of them then get them to Meisters. I'm sure glad my name isn't Someone.
Posted by Judy Sceggel at 4:32 AM