We had another busy day at the Berean office. Thankfully everyone that comes knows exactly what to do and they all start right in slitting open the hundreds of envelopes. 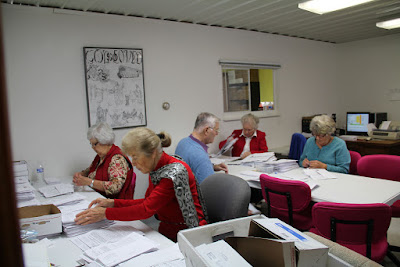 Above are the study processors and below are the letter readers minus one. Mom was another reader but had to leave early for her sewing club Christmas party. 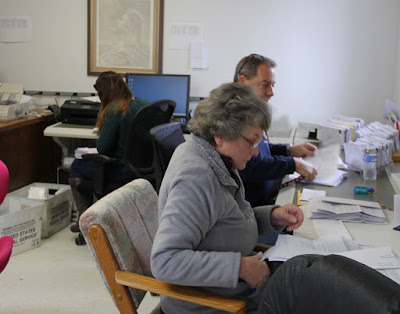 Janelle was put to work on the computer. We are not sure how we can survive without her next semester. We should probably find out what days she is free then plan on working those days since she won't be able to come on Tuesdays or Thursdays next semester. 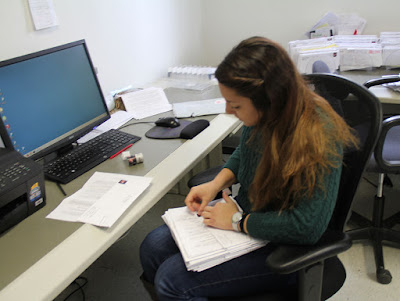 We were a little short on people getting the labels on the envelopes so Justin graduated from stamping envelopes to labeling envelopes. Anyone that can read can do this job and Justin did great. 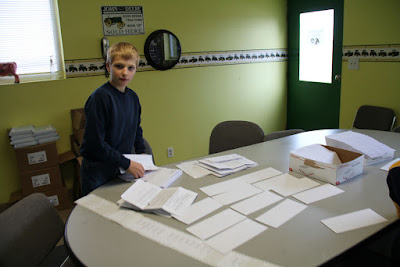 Marie kept everything running smoothly while Janelle and I entered. Below Justin and Timmy are bringing all the studies into the kitchen area, after lunch they were separated on the big table. 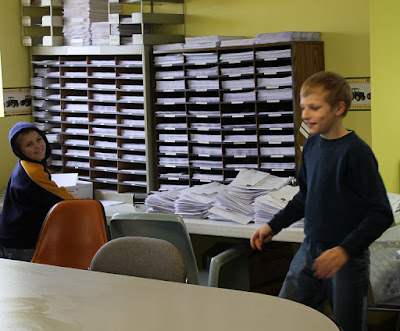 We were not able to finish before lunch. Today for lunch we had one of Fede's famous recipes. Romanian Shepherd Stew. Fede brought this recipe home from Romania, it take just 3 ingredients plus water, salt and pepper. The shepherds would cook this over a camp fire while watching the sheep. When it was announced that we were going to be eating this groans were heard throughout the office. They were sure it was going to be something pretty gross like road kill, lard on an onion or horse meat but after hearing it only held onions, potatoes and beef most were willing to taste it. Once it was tasted it got the seal of approval and was enjoyed.
After lunch Marie got everyone separating, stuffing and sealing envelopes while I entered the letters. Everything but the letters was finished by 1:30 pm. Marie stayed and helped finish entering the request letters. On Thursday we will have close to 400 Bibles to stuff, label and mail out.
Posted by Judy Sceggel at 7:40 PM