When I arrived at the Berean office this morning the computer had a strange message on the monitor screen that would not go away. The computer was turned off and restarted three times and each time I tried something different but it just wouldn't turn on. No Bible studies could be processed today. Instead we worked on stuffing and wrapping Bibles. Praying the computer will be fixed soon as the mail is sure to start stacking up on us.  Chuck arrived with 4 cases of bottled water from Midwest Food Bank. A big thank you to that organization for supply this office with drinking water. The well here is fine for washing but not for drinking.  Chuck, Eva Jean, Anna, Roma, Edie and I were able to get 9 full boxes stuffed, wrapped, labeled and loaded into the car. Just as we finished up and were getting ready to leave I realized the camera had not been touched and no pictures of the workers. Chuck was already out and in his car when I snapped the picture below: 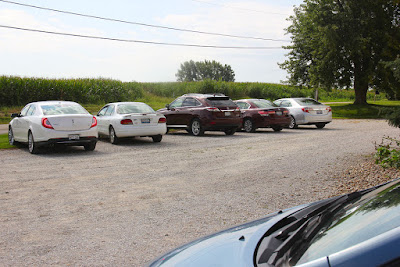 Funny there were 6 of us working and each has his or her own car. Isn't America great! What an amazing country that not only do we each have a nice car to drive it is EXPECTED that each of us have transportation. The noise level outside was pretty loud, we looked up and birds, hundreds of birds all resting on the power lines all emphatically stating their case. 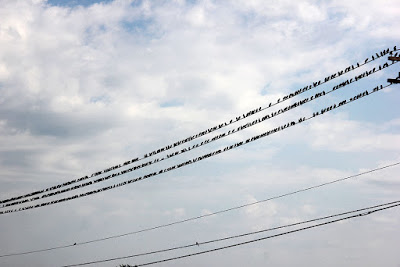 They were lined up so far that the camera could only capture a fraction of the line-up. 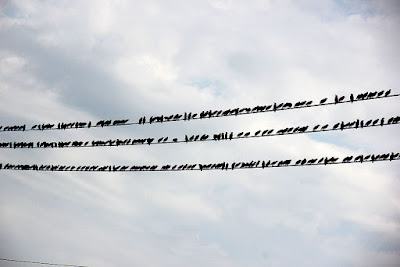 Each bird was chattering away to his neighbor above, below and either side drowning out the sound of the traffic. Below Anna, Roma and Eva Jean were getting ready to leave. Mom brought in vine ripened tomatoes for the volunteers and these ladies were deciding how many to take home. 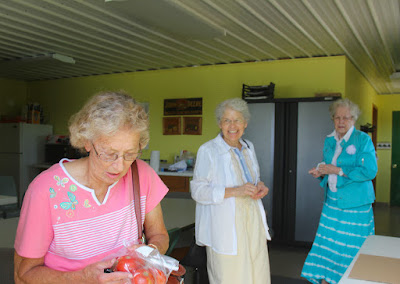 Below Edie is holding the only piece of mail going out today. With the computer not working, no labels could be printed but this one had been finished yesterday. 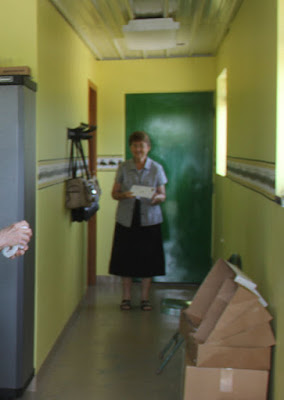 I stopped at Meisters on the way to the post office to ask Philip what he thought was the problem and he said it sounded like the hard drive crashed. Marvin was glad to go look at it and sure enough the hard drive crashed. Unfortunately the last back up was about a month ago. We are going to be in a mess. Speaking of messes, Lynn or Mim if you are reading this we had a problem with the box of studies Chuck got all ready to mail to you. When I arrived at the post office Tuesday the box was not in my car, thinking it must not have been loaded in my car, when I arrived at the Berean office Wednesday I looked for the box but it was not at the office. Marie solved the mystery to where the box was, it had been put in the mail box with all the studies going out to be mailed and there were so many envelopes they completely covered the box so I had no idea it was in there. I ran to the post office today to pay for it but they didn't catch it either and sent it along with all the other outgoing mail. So it may reach you with postage due OR it may go back to Chuck as his was the return address. SO sorry.
Also a big thank you to Mim for the books.