Below are Spark's notes from his time as Chaplain at the Peoria County Jail:

For the last 5 years or so we have been going to the IRCC on the second Friday of every month to do a bible study.  It has been kind of depressing lately since we were not getting much attendance.  Several times no one showed up and most times 4 people would be the average attendance.  This Friday 25 men walked in.  Since the inmates have no way to find out who will be allowed to come to the service I asked them what made them decide to come.  They did not know why they felt like they should be there until one of the inmates said he felt that the Holy Spirit wanted him to be there that night.  Gary had the lesson on peace and one of the inmates said that he and 2 other inmates that also happened to be there had gotten into an argument earlier and he felt that he needed to ask their forgiveness and wanted to know if they could leave all their anger at the "alter".  The next thing I see is that quite a few of the inmates come up to the podium and start praying for peace and forgiveness and the worship service went to a higher level than we have ever seen in this place.  The time flew by and a guard said it was time to leave.  Can't wait for November's time.

Time also for me to update a bit on the Berean activities. On Thursday besides our normal volunteers, in the afternoon we had a sewing club come and wrap Bibles. Below are a few pictures of the morning and afternoon. Marie brought Justin in to help. Below he is unloading. Justin is amazing, he is home schooled but enjoys coming to work here he will do twice his school work on Wednesday so he can spend the day wrapping and loading Bibles for us old folks. We SO much appreciate his willingness. 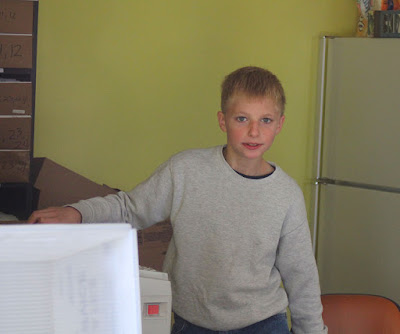 Below Diane is looking up an address on her phone. We don't have internet at the Berean office but thankfully enough people have smart phones that when we need to look up an address or a phone number of a prison we can find it. 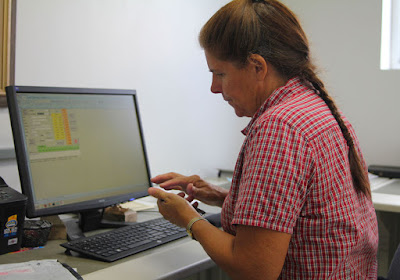 Marie is loading boxes to take home. She takes sets of lessons home and in her spare time will fold and stuff them so we have a supply of ready lessons to send out. We send out 4 lessons at a time each with a postage paid business envelope. That way the prisoner doesn't have to pay any postage. 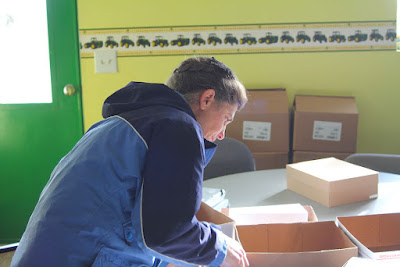 Below are the 2 Dianes that work at this office. One is what we call a 'reader' and the other is bossy...I mean a boss. 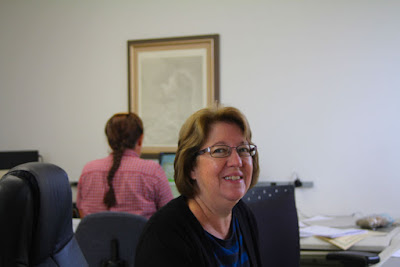 Below was a nice thank you note on the bottom of the study.

Edie was the volunteer that opened this study and had to share it with the rest of us. 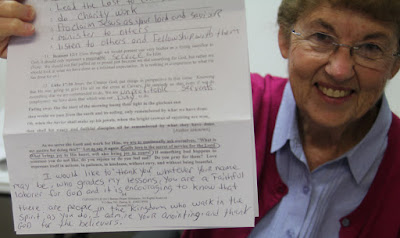 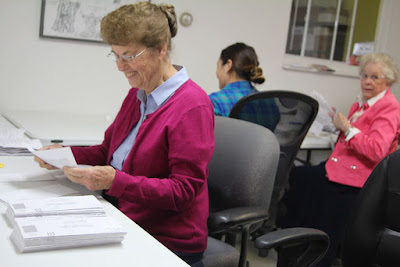 Diane brought in lunch today. Not shown were the home baked monster cookies she served both for the morning and the afternoon volunteers. BTW lunch was delicious. 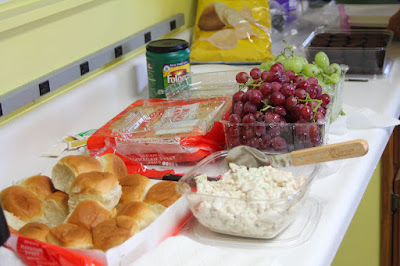 Some of our morning people stayed to help with the afternoon volunteers. 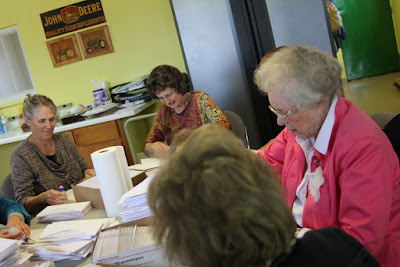 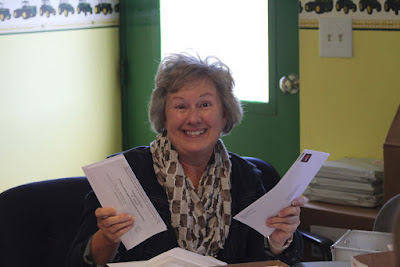 There were more that stayed but the last pictures taken didn't turn out. A big thank you for all the hard work. Diane has a praise story to tell. Her van was loaded down with 25 boxes of Bibles to be mailed out this sewing club wrapped and labeled. When she was getting ready to head to the post office Melanie asked her, "who is going to help unload all of this?" Diane replied, "each time I go with a big load I start praying asking God for help. So far every time I needed help someone would be there." "one time it was a man who came out to take a smoking break and another time some guys arrived and helped." She didn't know what to expect but she really needed the help, her back was hurting from lifting those 25 boxes that each weigh 32 pounds up on to the table to get them wrapped and stamped, then from there packaged them back in the boxes and carried them out to her van. Well she is praying hard, drives up to the Bartonville post office when who should get out of his truck but Jake Guerst. He was more than happy to unload then said, "I've been meaning on asking how to donate to this program!"
God is Faithful!
Posted by Judy Sceggel at 8:15 PM