We didn't start the day very well at the Berean office. Ellen was not able to get enough Bible stamps printed off, the meter just didn't have enough money on it. Jacob brought us a pallet of Bibles but when the wrap was taken off we knew they were the wrong Bibles. He did not think there would be time today to bring another load but that was ok since we didn't have the Bible stamps anyway. The copy machine broke on Tuesday, we were hoping Lance had come to repair it but it wasn't fixed when Marie tried it. We are completely out of some studies and were not able to fill the requests on Tuesday. Lance was called again and he agreed to come out later.
Then as I was typing in the studies while talking on the phone to one of the graders who happens to live in South Carolina a text came through from Jacob, he could bring a pallet of Bibles now, did we want them? Of course that text had to be answered with a big YES PLEASE! The Bibles arrived within 20 minutes and we just happened to have a big crew here ready to help unload and best of all they just jumped right in stuffing, wrapping and labeling. 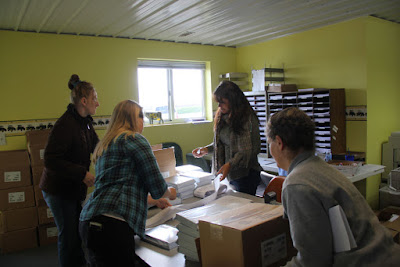 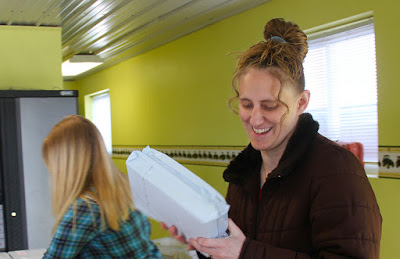 We were able to get postage on about 350 Bibles but were short of the Bible stamps by probably another 150. Ellen promised to have those PLUS the regular amount by Tuesday. In the other room Edie, Anna, Eve Jean, and Roma were working on the studies that came in today. 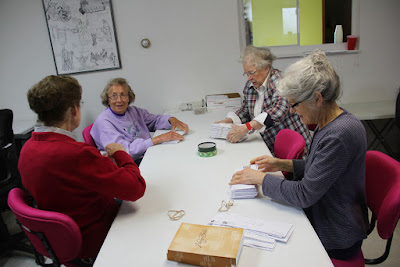 While Debbie and Rachel read letters at the other table. They were joined a bit later by Diane R. 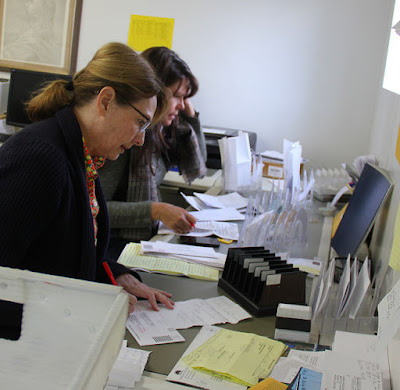 The big problem of the day came when Chuck arrived. Debbie was SITTING in Chuck's CHAIR! 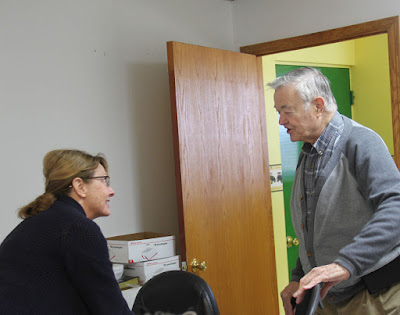 We had a lot of fun giving her a hard time about stealing the Elder's chair. 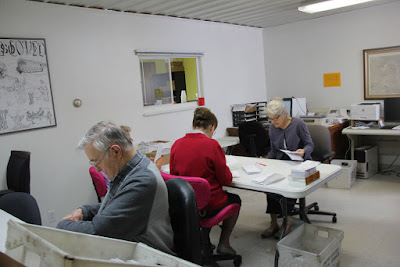 As soon as we finished with the letters the readers joined the Bible wrappers in the other room and with all that help we were able to get a lot of this pallet wrapped and mostly labeled. 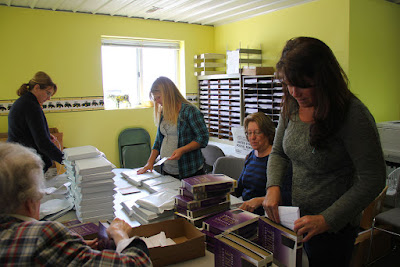 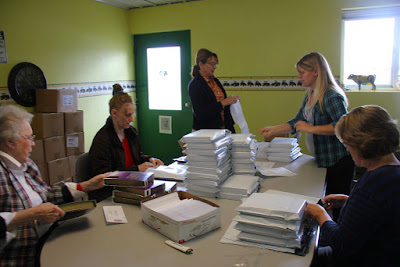 Then more good news came when Lance arrived to work on the copy machine. Now this was weird but when he turned it on and ran a copy through there was NOTHING wrong with it. It worked perfect for him. Wanting to make sure there really was nothing wrong we had him make hundreds of copies (just happened to be the ones we needed) and the machine worked perfectly every time. 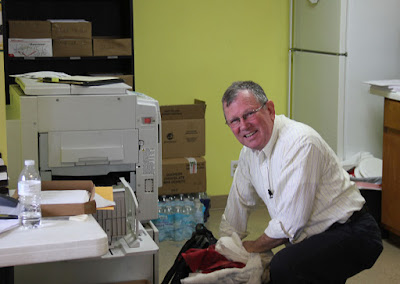 So even though the day started with a few problems it ended great. We were able to get most of the Bibles mailed out and all of the studies. Amazing that we survived another week!
Posted by Judy Sceggel at 8:27 PM